William B. Irvine, a modern day Stoic, made some interesting comments on Stoicism and political correctness in his A Guide To The Good Life:


We live in a time, to be sure, in which few people are willing to respond to an insult with humor or with a nonresponse. Indeed, those who advocate politically correct speech think the proper way to deal with some insults is to punish the insulter. What most concerns them are insults directed at the “disadvantaged,” including members of minority groups and people with physical, mental, social, or economic handicaps. Disadvantaged individuals, they argue, are psychologically vulnerable, and if we let people insult them, they will suffer grievous psychological harm.  Advocates of politically correct speech therefore petition the authorities - government officials, employers, and school administrators to punish anyone who insults a disadvantaged individual.


Epictetus would reject this manner of dealing with insults as being woefully counterproductive. He would point out, to begin with, that the political correctness movement has some untoward side effects. One is that the process of protecting disadvantaged individuals from insults will tend to make them hypersensitive to insults: They will, as a result, feel the sting not only of direct insults but of implied insults as well. Another is that disadvantaged individuals will come to believe that they are powerless to deal with insults on their own—that unless the authorities intercede on their behalf, they are defenseless. The best way to deal with insults directed at the disadvantaged, Epictetus would argue, is not to punish those who insult them but to teach members of disadvantaged groups techniques of insult self-defense. They need, in particular, to learn how to remove the sting from whatever insults are directed at them, and until they do this, they will remain hypersensitive to insults and will, as a result, experience considerable distress when insulted.


Epictetus, whose name means "acquired", was born a slave and lived in poverty.  I am not sure where this places him on the privilege chart but perhaps he was under-privileged enough to have the privilage of offering an opinion. 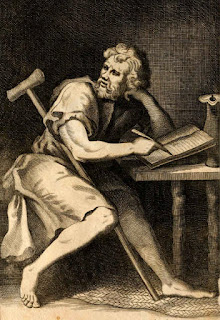