Nietzsche on the Stoics 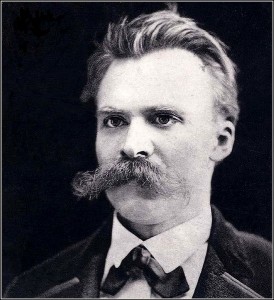 Nietzsche on the Stoics :

You desire to LIVE "according to Nature"? Oh, you noble Stoics, what fraud of words! Imagine to yourselves a being like Nature, boundlessly extravagant, boundlessly indifferent, without purpose or consideration, without pity or justice, at once fruitful and barren and uncertain: imagine to yourselves INDIFFERENCE as a power--how COULD you live in accordance with such indifference? To live--is not that just endeavoring to be otherwise than this Nature? Is not living valuing, preferring, being unjust, being limited, endeavouring to be different? And granted that your imperative, "living according to Nature," means actually the same as "living according to life"--how could you do DIFFERENTLY? Why should you make a principle out of what you yourselves are, and must be? In reality, however, it is quite otherwise with you: while you pretend to read with rapture the canon of your law in Nature, you want something quite the contrary, you extraordinary stage-players and self-deluders! In your pride you wish to dictate your morals and ideals to Nature, to Nature herself, and to incorporate them therein; you insist that it shall be Nature "according to the Stoa," and would like everything to be made after your own image, as a vast, eternal glorification and generalism of Stoicism! With all your love for truth, you have forced yourselves so long, so persistently, and with such hypnotic rigidity to see Nature FALSELY, that is to say, Stoically, that you are no longer able to see it otherwise-- and to crown all, some unfathomable superciliousness gives you the Bedlamite hope that BECAUSE you are able to tyrannize over yourselves--Stoicism is self-tyranny--Nature will also allow herself to be tyrannized over: is not the Stoic a PART of Nature? . . . But this is an old and everlasting story: what happened in old times with the Stoics still happens today, as soon as ever a philosophy begins to believe in itself. It always creates the world in its own image; it cannot do otherwise; philosophy is this tyrannical impulse itself, the most spiritual Will to Power, the will to "creation of the world," the will to the causa prima.

And so Nietzsche wields his philosophical hammer against the Stoics. But does the hammer smash the clay feet of Stoicism or impact impotently against straw?

"Oh, you noble Stoics, what fraud of words!"

In the above quote Nietzsche neatly exposes the somewhat vacuous nature of the famous Stoic slogan 'living according to Nature'. Humans are part of nature. How then can we not live according to nature?  Why make a principle out of  "what you yourselves are, and must be?".  Living according to gravity for example is not a  useful principle because we cannot do otherwise. This is what Nietzsche calls a fraud of words.

When Stoics say 'living in accordance to Nature' they are articulating their concept of the good life which brings peace of mind and tranquility.  Stoics believed we humans are part of Nature, a small apart of the whole and because of this we are naturally attracted towards things appropriate to our nature both as humans and as individuals. So Nature in this context is a mixture of objective facts about the physical world merged with subjective facts over our individual characters.  It must also be remembered that what matters to a Stoic is the judgement he makes in response to events because this judgement is responsible for our emotional state and our future actions.  Stoics are more concerned with forming correct preferences and responses than with making a correct choice between available courses of action because such choices are deterministic in nature and therefore beyond our control. This approach is frequently confused for free will.

However Nietzsche is still swinging his hammer. How can they do differently he still demands? Why claim the authority of nature to justify their own desires?  "In your pride you wish to dictate your morals and ideals to Nature, to Nature herself ".

Agreed; we cannot do differently says the Stoic but we can control the judgments we form in response to events and actions. We can train our character through philosophy to act in accordance with Nature to the best of our experience and our knowledge. What you, Nietzsche, call self-tyranny, we call freedom because freedom is the removal of desire, not its indulgence.  Our will is not towards the "creation of the world" but to understand the order by which the world operates. We are rational creatures by nature and our character is to inquire into such matters.  How can we do differently?

Central then to Nietzsche attack is the apparent contradiction in Stoicism between character formation and determinism which I've posted about before.